Walking by the camera

He is known under many names depending on the video.

Skinny first appeared in "My Kitty Cat" in 2017, which has since been renamed "Skinny The Cat's debut". It is a simple video of Skinny looking around. At the time, he was very young and thin, thus the name "Skinny". He made appearances in other videos following, such as REAL LIFE NINTENDO GOLF, and various others.

He would also continue to star in 2018, under various different names. In The Alternate Dimension, he is not referred to by name, and in the now privated/removed 2girls1cup reaction, he was referred to as Ed.

After, he went by the name of Scar, after Scar from The Lion King. He got this name for two reasons: 1, to have an intimidating sounding name, and 2, because Skinny kept coming home all bruised and mutilated from the situations he'd get himself in.

He was set to have returned in June 2019 in the 4th Mask Transformation, but that video was put on hold for re-shooting. However, in that time, Skinny went missing and hasn't been found to this day.

Skinny appeared in The Surround Productions Halloween Special, via archive footage, which is the same way that he made it into the Christmas Special.

Skinny was said to be a very lazy cat. He wouldn't play with cat toys such as a laser pointer, and he would often let mice run right past him.

He once killed a squirrel and brought it back to the porch, and he ate it.

Like most tomcats, Skinny would get into fights with other cats, coming back home all bruised up.

Skinny has been missing as of June 2019. As stated, he would get into catfights and it is very possible another cat may have killed him. 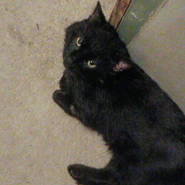 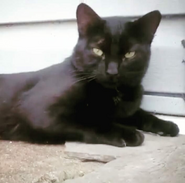 Skinny in 2017, in his most earliest appearance 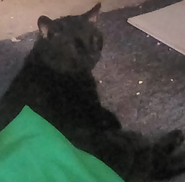 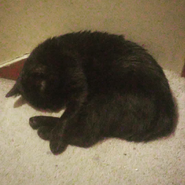 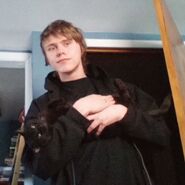 LW Leon and Skinny
Add a photo to this gallery
Retrieved from "https://surround.fandom.com/wiki/Skinny_The_Cat?oldid=627"
Community content is available under CC-BY-SA unless otherwise noted.