He first wears this attire in the cover of You're A Mean One, Mr. Grinch, singing the song in the style of the Carrey version from 2000.

This persona was foreshadowed by The Phantom when he unmasked himself on live TV, stating him and Venom were going to make a move, although unlike the Symbiote, The Phantom was reluctant to the idea but he eventually gave into it.

Santa Phantom is the main character of The Christmas Eve Masquerade-accre. In an attempt to restore Christmas, meaning to rid the town of SJWs (Social Justice Warriors) and anyone who has a complaint about Christmas not being Politically Correct, and he additionally attacked former bullies, YouTube trolls.

6 people are killed in the Masquerade-accre, but if you pay attention, Santa Phantom is almost not responsible for the deaths as Santa Phantom, as Venom and The Mask are only seen and heard killing anyone. However, it can be assumed that Santa Phantom had to responsible for at least one death, considering how pushed he was and that former bullies were said to be killed.

He is shot down by Banjo Bill, who hadn't been seen in months, but Santa Phantom survives this, and he gets up and takes care of his duplicate based off of Oogie Boogie, to discover that the Santa they kidnapped wasn't the real Santa. Then, The Phantom visits the Neighbor Kid, (played by LW Leon's real life friend Ryan McNeilly) and gives him a present, but it was never seen what was in the package.

After The Phantom returns home, he is greeted by his henchmen singing Finale/Reprise from The Nightmare Before Christmas (a slightly edited version), which gets him to remember there are people who do (or did) appreciate him.

Aside from the costume, nothing really special besides it somehow did a good job of camoflauging his true identity, as The Phantom of Darkness isn't very well known yet.

"You're a mean one, Mr. Grinch. You really are a heeeeeeel!" 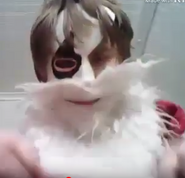 Putting the beard on
Add a photo to this gallery
Links:

Mr. Grinch  https://youtu.be/CAGV00cQjjw If you are interested in seeing the videos to this storyline, and plan to be professional and constructive, contact LW Leon at 14mcphantom @gmail.com or Instagram Account lw_leon_woodworth. Also, be very specific about who you actually are as you will only get links of you're trusted.

Retrieved from "https://surround.fandom.com/wiki/Santa_Phantom?oldid=477"
Community content is available under CC-BY-SA unless otherwise noted.